By Dr John Briffa on 30 December 2013 in Cholesterol and Statins, Food and Medical Politics

A recent from the Organisation for Economic Co-operation and Development has found that rates of statin prescription in the UK are the highest in Europe, and second only to Australia on a world-wide basis. Some have criticised the widespread prescribing of statins, and a common criticism here is that it fails to deal with the true underlying factors in cardiovascular disease such as heart disease and stroke. In a recent piece in the Times newspaper (this piece is behind a paywall), Sir Roger Boyle, the UK Government’s former “heart czar” is quoted as saying that the UK needed to take a more “rigorous approach” to prescribing statins, which he said were given to the “worried well”.

However, this piece in the Times also quoted sources from charities that are wholehearted supporters of statins. One source is Professor Peter Weissberg, the medical director of the British Heart Foundation (BHF). Back in August, I had a personal exchange with Professor Weissberg, when asked him to validate the BHF’s support of the use of sterol-enriched foods in the diet. I pointed out that not only was there no evidence of any health benefits for such foods, there was also considerable evidence that sterols might have adverse affects on health and wellbeing. It didn’t take long for Professor Weissberg to disengage from the subject, and you can decide for yourself whether this man’s medical opinion is trustworthy by reading the exchange I had with him here.

Professor Weissberg credited the drugs with helping to lead to a huge drop in heart disease. “If you look at death rates from cardiovascular disease over the last 40 years, they have plummeted,” he said.

“That has not happened by accident,” Professor Weissberg said. “It is because people have stopped smoking, take more exercise and take better drugs.”

However, we cannot determine the supposed protection from statins by looking at mortality statistics over the last 40 or so years. That’s partly because, as Professor Weissberg alludes to, there may have been many factors at play here. So, how do we know what proportion of the reduction in risk that occurred was down to statins? The answer is, we don’t.

Should Professor even be referring to the last 40-years at all? After all, cholesterol-modifying drug prescriptions including statins only really got altitude in the mid-90s, as this graph shows. 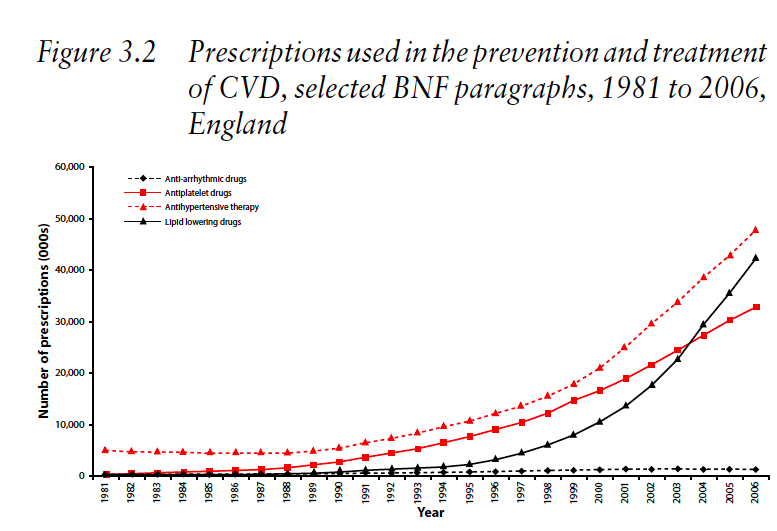 This graph shows an almost-exponential rise in lipid-lowering drugs from the mid-90s onwards, and we can compare this with the death rates from cardiovascular disease over the same time period. 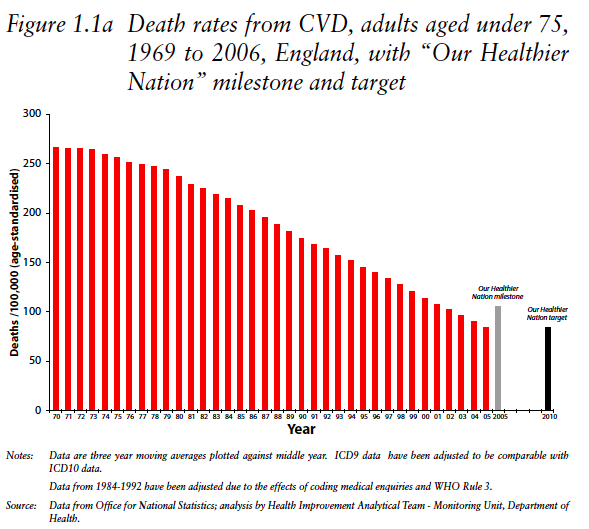 It shows a general and steady decline from the early 70s. But there’s absolutely no indication here that the rapid rise in lipid-lowering medication led to an acceleration in the reduction in deaths due to cardiovascular disease.

In other words, there’s really no evidence here that statins have been particularly staving off cardiovascular disease.

I suppose it should not go unmentioned that even if this ‘epidemiological’ data showed an apparent association between burgeoning rates of cholesterol drug prescriptions and protection from cardiovascular disease, it would still prove nothing.

Oh, and by the way, if you’re wondering where the graphs above come from, they are to be found in one of the BHF’s own documents which can be found here. Professor Weissberg should be intimate with the details of the document, because he wrote the foreword for it.

Professor Weissberg said that doctors were currently limited by “pretty stringent” guidelines setting out when they can prescribe statins. “They say a person has to have a 20 per cent chance of having a heart attack within the next ten years to be prescribed a statin,” he said.

I’m at a loss to understand what point is being made here. Is Professor Weissberg somehow comparing a one-in-five chance of winning the lottery with the chances of benefitting from taking a statin? Because, if he is, his maths are way off.

The great majority of people taking statins have never had a heart attack or stroke (what is termed ‘primary prevention’). Under these circumstances, the data show that about 75 people would need to be treated for a decade to prevent one heart attack or stroke. In other words, the chances of benefitting over a decade of treatment are one in 75. But let’s not forget that the chances of significant side effects including diabetes, muscle pain, fatigue, liver damage or kidney damage are about 20 per cent – one in five.

These are the sorts of statistics that really count, not some reassuring rhetoric about ‘plummeting’ rates of cardiovascular disease based on epidemiological data that do not even support Professor Weissberg’s position. In one way, though, his analogy is apt: taking a statin is a bit like entering a lottery, where the chances of winning are dwarfed by the chances of losing.

Can we trust the NHS and dieticians to tell us the truth about diet?
The Calorie Myth by American author Jonathan Bailor