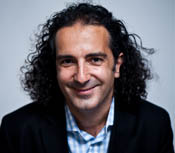 Dr John Briffa is a practising doctor, author and international speaker. He is prize-winning graduate of University College London School of Medicine, where he also gained a BSc degree in Biomedical Sciences. Dr Briffa is a leading authority on the impact of nutrition and other lifestyle factors on health and illness. He is dedicated to providing individuals with information and advice they can use to take control of their health and optimise their energy and vitality.

Dr Briffa is a former columnist for the Daily Mail and the Observer, and former contributing editor for Men’s Health magazine. He has contributed to over 50 newspaper and magazine titles internationally, and is a previous recipient of the Health Journalist of the Year award in the UK.

Dr Briffa has authored nine books on the subject of nutrition and self-help health.

UK Health Journalist of the Year 1998