By Dr John Briffa on 9 May 2013 in Brain and Behaviour, Low-Carbohydrate

I came across this story today. Published yesterday in the Daily Mail, it reports research in which, apparently, high-fat meals were found to induce sleepiness in individuals, compared to high-carb ones. I have looked for this study on-line and can find no trace of it (only references to it). What this sometimes means is that the reports have been written on the basis of a press release and not the actual study.

Another clue that it’s the press release that formed the basis of this report is the presence of quotes from the lead investigator. These don’t just appear in the Daily Mail piece, but also one that was published in the Daily Telegraph here.  Here are the quotes in question from professor of psychiatry Alexandros Vgontzas:

Excessive daytime sleepiness and fatigue are very prevalent in the modern world and are on the rise.

It appears that a diet high in fat decreases alertness acutely, and this may have an impact on an individual’s ability to function, and also on public safety.

Also, here’s the opening lines from the Telegraph piece:

That sleepy feeling after lunch has long been the enemy of office workers, and now scientists believe it may be down to what people are eating.

While consuming a bowl of pasta or a sandwich perks people up, meals containing a high level of fat are more likely to cause someone to doze off, according to a new study.

Researchers at the Penn State College of Medicine in America found gorging on fatty foods, such as chips and red meat, makes healthy people more sleepy during the day and less likely to function properly.

Those following the Atkins diet are encouraged to eat unlimited amounts of fat and protein and ditch carbohydrate-rich food such as potatoes, pasta and starchy vegetables.

However the research reveals that eating more carbohydrates – found in bread and pasta – actually increases the alertness of healthy, non-obese adults – giving them more focus in their everyday lives.

It’s not clear if the fatty foods such as ‘chips and red meat’ or the carbohydrate-rich foods such as ‘pasta or a sandwich’ are the meals that were tested in this study or the journalist’s interpretation of these foods. Anyway, it’s impossible to glean any useful detail about the study from the reports but, as I say, I could not trace the study on-line so remain none-the-wiser.

What struck me as I read these reports was how this research appears to have yielded results that are the polar opposite of what I find to be consistently true in practice. Namely, that when individuals scale back their carbohydrate intake and put a little more emphasis on protein and fat (meat, eggs, oily fish and nuts), they almost always see a significant improvement in their energy levels, particularly through the afternoon.

I suspect a few mechanisms may be going on here including:

1. less risk of low blood sugar (hypoglycaemia) subsequent to the sugar surge many starchy foods including bread, pasta and potato tend to induce

2. less risk of suffering from fatigue that can come as a result of food sensitivity issues that I find are quite common with wheat

3. heightened supply of amino acids (building blocks of protein) into the brain that can enhance mental energy and focus through increased production of ‘neurotransmitters’ such as noradrenaline and dopamine

Anyway, all this matters less, in my opinion, to the fact that I find improvements in energy and concentration on a lower-carb more ‘primal’ diet to be extremely consistent.

But it appears I’m not the only one who has experience of this phenomenon. The Daily Mail allows readers the opportunity to vote on responses given to an article. The system is biased by the fact that the longer a comment has been up, the greater opportunity there is to amass either positive or negative votes. Nevertheless, here below are the most popular responses at the time of writing. What you’ll see here is comment after comment making, essentially, the same point that I make here: carbohydrate-rich diets do not tend to make people more alert at all -  in fact quite the reverse is true. The truth is, when individuals scale back carbs and put more emphasis on protein and fat, the usual effect is one of enhanced energy and mental focus. 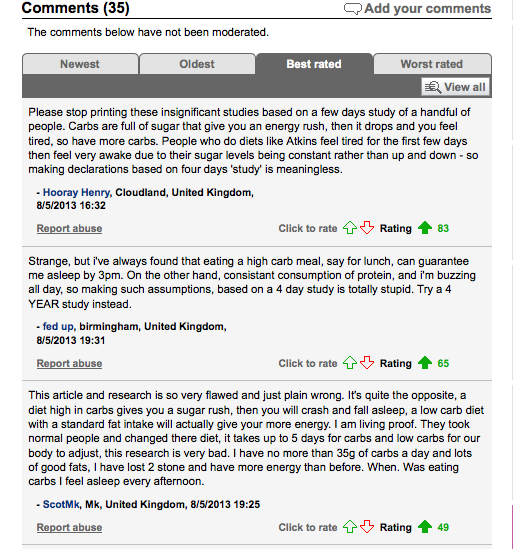 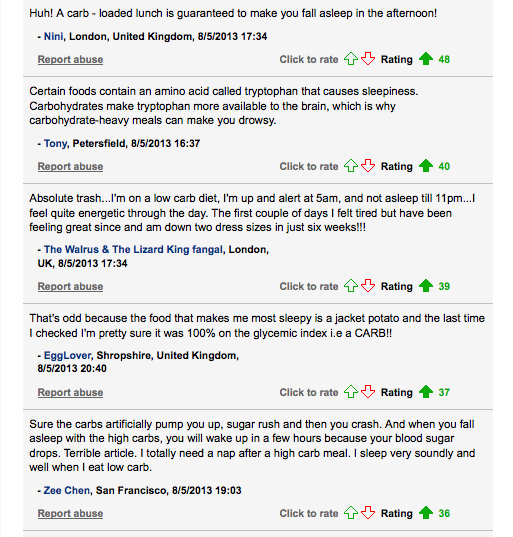 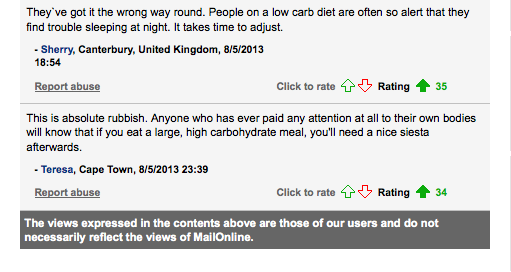