Some potentially good news for UK patients: doctors may go out on strike

The UK Government is broke, and is doing it’s best to spend as little money as possible, including on pensions. It’s offered state-employed doctors here a pension deal, but the doctors are not happy about it and now there’s talk of strike action. The situation may seem dire for patients who will not have as much access to medical care. However, if history is anything to go by, a doctors’ strike may in fact be a cause for celebration.

I say that because back in the year 2000, many Israeli doctors went out on strike for about three months. This coincided with a very real drop in mortality rates. The situation was reported in the British Medical Journal [1], and I remember reading the article at the time. Here are some quotes from it:

Industrial action by doctors in Israel seems to be good for their patients’ health. Death rates have dropped considerably in most of the country since physicians in public hospitals implemented a programme of sanctions three months ago, according to a survey of burial societies.

The Israel Medical Association began the action on 9 March [2000]… Since then, hundreds of thousands of visits to outpatient clinics have been cancelled or postponed along with tens of thousands of elective operations.

In the absence of official figures, the Jerusalem Post surveyed non-profit making Jewish burial societies, which perform funerals for the vast majority of Israelis, to find out whether the industrial action was affecting deaths in the country.

“The number of funerals we have performed has fallen drastically,” said Hananya Shahor, the veteran director of Jerusalem’s Kehilat Yerushalayim burial society. “This month, there were only 93 funerals compared with 153 in May 1999, 133 in the same month in 1998, and 139 in May 1997,” he said.

Meir Adler, manager of the Shamgar Funeral Parlour, which buries most other residents of Jerusalem, declared with much more certainty: “There definitely is a connection between the doctors’ sanctions and fewer deaths. We saw the same thing in 1983 [when the Israel Medical Association applied sanctions for four and a half months].”

Motti Yeshuvayov of Tel Aviv’s only burial society said that he had noticed the same trend in the Tel Aviv metropolitan area in the past two months.

There are reports of similar drops in death rates when doctors have gone on strike in Canada and Los Angeles (though I’ve not been able to confirm the veracity of these reports) .

I don’t want to denigrate the whole of conventional medicine. Actually, some aspects of it (high-tech diagnostics, surgery and emergency medicine, for example) I think are broadly genuinely worthwhile. However, a lot of what we do in medicine I think is not as effective as we’ve perhaps been led to believe. It can also be very hazardous (and take lives) of course.

There’s a kinda cloak of respectability that still surrounds modern medicine. But the fact that death rates appear to fall when doctors go out on strike suggests that when we peel back that cloak, we find plenty of things we won’t like the look of. 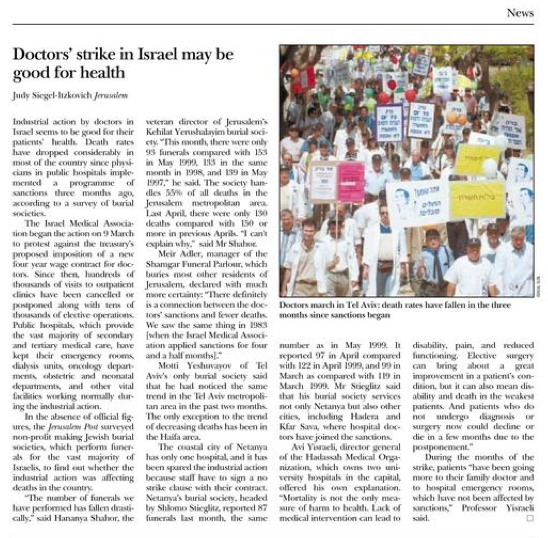 11 Responses to Some potentially good news for UK patients: doctors may go out on strike