How accurate are Professor Collins’ claims about the rates of muscle problems with statins?

By Dr John Briffa on 22 August 2014 in Cholesterol and Statins, Food and Medical Politics

I have written more than once about Professor Sir Rory Collins. He leads the Cholesterol Treatment Trialists collaboration in Oxford, UK. Periodically, this group takes (private) statin study data and churns out bold pronouncements on the (supposed) great effectiveness and safety of these drugs. Professor Collins recently tried to get the BMJ to retract two papers that were faintly critical of statins. A committee convened by the BMJ to look into this matter found there were no grounds for retraction.

This episode centred around the claims made in the BMJ papers that regarding the adverse effects of statins. Professor Collins maintains that the papers overstated the hazards and, as a result risked putting people off taking statins, which (according to him) ‘risked lives’.

One line of attack taken by Professor Collins is the fact that while some claim that muscle problems appear to be quite common in those who take statins, randomised controlled trials fail to support this. In fact, these studies typically find that muscle damage is very rare.

Professor Collins was the lead investigator in a huge statin study (known as the Heart Protection Study) which found that ‘myopathy’ was only found in 0.05 per cent of people taking a statin. Here you will find Professor Collins quoting this figure in support of the safety of statins.

First of all, take a look at this table from the Heart Protection Study. It gives the rates for myopathy with and without ‘rhabodomyolysis’ (a condition where the damage is so bad the muscles basically go into meltdown). 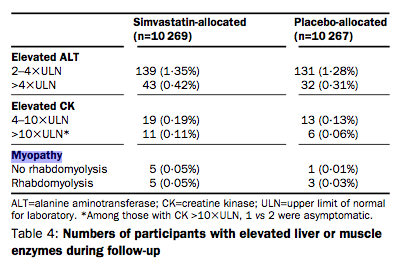 I think it’s interesting to consider first of all how myopathy is defined in Professor Collins’ study. When muscle is damaged, it can liberate a substance known as creatinine kinase into the bloodstream. So, elevated levels of creatinine kinase point to muscle damage. Whether levels of a biochemical marker are considered normal or not depends on ‘normal ranges’ that generally encompass about 95 of the population. What this means, in effect, is that for someone to have a ‘raised’ creatinine kinase blood levels would have to be in about the top 2-3 per cent of the population. However, in the HPS study, myopathy was only diagnosed when creatinine kinase levels were more than 10 times the upper limit of normal.

But is there anything else about the Heart Protection Study that means it would be unlikely to pick up problems that may occur more frequently in the general population?

In the Heart Protection Study study, a total of 20,536 people were randomly assigned to take statin (simvastatin) or placebo. However, a total of 32,145 were recruited into the study to begin with. What happened to the 11,609 people who did not make it into the study proper?

The Heart Protection Study employed a ‘run-in period’ which all 32,145 people were entered into. For 4 weeks, individuals were given a placebo which, according to the researchers, allowed assessment of biochemistry including creatinine kinase. After this, individuals were treated with simvastatin for 4-6 weeks. This was, according to the researchers, “to allow a prerandomisation assessment of the LDL-lowering “responsiveness” of each individual.” This makes it sound as though if simvastatin did not have the ‘desired’ effect on someone’s cholesterol level, they would be removed from the study. If so, I’d say that is not the most scientific way of assessing the impact of this drug in the general population.

But, elsewhere in the paper we are told that: “36% [11,609 people] were not subsequently randomised: 26% [8,358 people] chose not to enter the trial or did not seem likely to be compliant for 5 years…” But there is no detail given here. Why would people decide not to enter a trial after participating in a run-in period? One reason could be that they suffered unacceptable side-effects. And side-effects might also be the reason someone seems unlikely to be compliant for 5 years.

Whatever the facts of the matter here, one thing that is clear is that the run-in period in the Heart Protection Study had the potential to screen out many people who suffered from adverse effects from simvastatin including muscle symptoms. In short, the study was designed in a way which makes any extrapolation to the population at large completely inappropriate. Any attempt to generalise its findings to the wider population is, I think, either a sign of gross scientific naivety or outright intellectual dishonesty.

29 Responses to How accurate are Professor Collins’ claims about the rates of muscle problems with statins?

Leave a Reply to Mark Click here to cancel reply.