Flu vaccination is most certainly not a ‘no-brainer’

By Dr John Briffa on 22 November 2013 in Food and Medical Politics, Specific conditions

The winter heralds ‘flu season’, and many will be urged to get them themselves adequately protected through vaccination. A recent piece in the British Medical Journal [1] by Dr Peter Doshi (from the John Hopkins University School of Medicine in Baltimore, US) makes the point that public health campaigns often present flu vaccination as a no-brainer: we’re all at risk of flu and its complications, the flu shot is risk free, and vaccination saves lives. However, as Peter Doshi goes on to explain, all these assertions are open to question.

Dr Doshi questions the trend for increasing numbers of people being defined as ‘at risk’. In 1960, this definition only applied to individuals aged 65 or older. By 2010, this definition had extended to everyone over six months of age.

It is often claimed that flu vaccination saves lives. This claim is based on so-called ‘epidemiological’ evidence which finds that those who receive the flu vaccine are less likely to die than those who don’t. Risk reductions of 30 – 50 per cent are sometimes quoted. However, as Peter Doshi points out, flu only accounts for about 5 per cent of wintertime deaths. How, on earth, then can flu vaccination reduce the overall risk of death by those previously quoted figures? Answer: it can’t.

Dr Doshi also points to evidence that finds flu vaccination is linked with reduced risk of death outside winter. This does not point to flu vaccination having a real effect here, either. The likely explanation? That health-conscious and generally healthier individuals are more likely to opt for vaccination – the so-called ‘healthy user’ effect.

Some people claim that the evidence for the life-saving effects of flu vaccination are to be clearly seen in the figures showing declining mortality in recent years. However, as the following graph shows, flu mortality dropped dramatically and started to ‘bottom out’ well before flu vaccination became widespread. 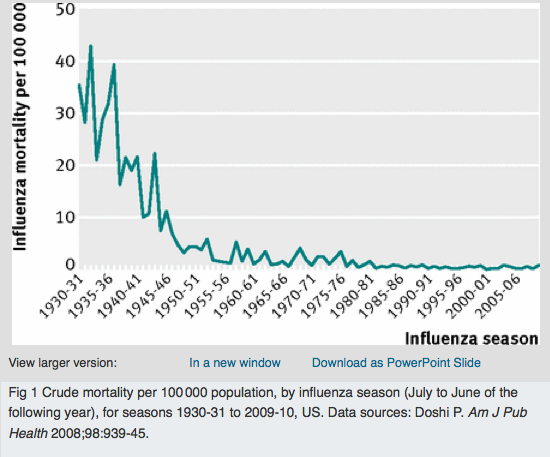 Dr Doshi even asks questions about the safety of flu vaccination. He points out that:

Australia suspended its influenza vaccination program in under five year olds after many (one in every 110 vaccinated) children had febrile convulsions after vaccination. Another serious reaction to influenza vaccines—and also unexpected—occurred in Sweden and Finland, where H1N1 influenza vaccines were associated with a spike in cases of narcolepsy among adolescents (about one in every 55 000 vaccinated). Subsequent investigations by governmental and non-governmental researchers confirmed the vaccine’s role in these serious events.

Currently, legal action is being taken on behalf of 38 individuals who appear to have developed narcolepsy as a result of vaccination with GSK’s ‘Pandemrix’ (for swine flu). The UK Government has admitted that there does indeed appear to be a genuine link here. For more on this story, see here.

Dr Doshi’s analysis goes us a great service,  I think, and may cause many to consider when flu vaccination is really the ‘no-brainer’ its often presented to be.