Exercise found to improve ‘fat genes’, but what about its effect on actual fat?

By Dr John Briffa on 10 July 2013 in Exercise and Activity, Weight Loss

What the study showed was the exercise appeared to change the expression of about a third of the genes in the fat cells, including some that relate to the risk of type 2 diabetes and the development of obesity. The authors of this study also draw our attention to benefits in terms of changes in waist circumference, waist-to-hip ratio, diastolic blood pressure (the lower of the two blood pressure readings), resting heart rate and levels of HDL-cholesterol. All good news, generally speaking.

However, I know from experience that when people adopt what they believe to be healthier behaviours, while they may have the long game in mind they also tend to like to see short-term pay-off too. Feeling like tangible progress is being made is, often, a great motivator for people. Whether we agree with this or not, many overweight individuals see their weight as an important marker of progress. The fact that weight is not mentioned in the report of the research raised a little red flag in my mind. I went to look at the actual paper here. This is Table 1 from the study which details the apparent effects of exercise on a range of body measurements. 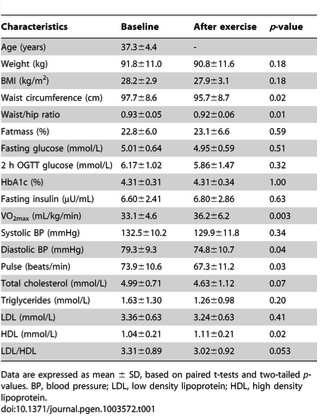 Here, you will that weight only declined by 1 kg on average (not statistically significant). If the waist circumference fell by 2 cm, that would suggest some fat loss. So, perhaps the group lost fat and gained muscle? Well, if you look at ‘fatness (%)’ in the table you’ll see that it did not change. Overall, the individuals seemed to be no less fat for their efforts.

In short, the results from a weight- and fat-loss perspective were pretty dismal and, for many individuals may have been quite demotivating.

While the results of this experiment on weight and fatness may be surprising to some, they actually reflect a considerable body of evidence which shows pretty much the same thing: aerobic exercises are, by and large, quite ineffective for the purposes of weight loss (though they may, of course, bring lots of other benefits).

I have previously explored why exercise may not deliver on its weight loss promise here. Increasing exercise can cause people to eat more. The problem is that, in general terms, exercise does not burn tons of calories (unless we’re doing heroic amounts of it). It doesn’t usually take much additional eating to wipe out any calorie deficit induced through exercise.

Also, although exercise is said to boost the metabolism, it appears this may not reflect reality for some people. Part of the post I link to above draws on studies highlighted by Jeff Volek and Stephen Phinney in their book ‘The Art and Science of Low-Carbohydrate Performance’. It shows that in overweight individuals, exercise can actually have a suppressant effect on the metabolism.

If we want children to eat more healthily, it’s best to explain why
Why does the British Heart Foundation support the use of unproven cholesterol-lowering foods?

6 Responses to Exercise found to improve ‘fat genes’, but what about its effect on actual fat?