Low-carb diets can help maintain the metabolism after weight loss

With rates of overweight and obesity generally on the up, it’s perhaps no surprise that many of us will seek to lose weight at one time or another. My experience is that the great majority of people who want to lose weight will be able to, but the issue can be the sustainability of that weight loss. In short, many people lose weight only to regain it again, often with a bit of added weight on top.

There are a number of reasons why conventional ‘dieting’ (using, say, a diet that is consciously restricted in calories and dietary fat) is unlikely to lead to lasting weight loss. One obvious issue is hunger. Consciously restricting calories will usually mean someone is hungrier than they would like, but weight loss seems to heighten this hunger, as evidenced by the fact that when individuals start to eat in a less restricted way, they can find themselves driven to eat larger quantities of food than they were eating before, at least until their weight ‘normalises’.

Another fundamental issue concerns the metabolic rate. We expect this to decline as the body loses weight. However, there is evidence that metabolic rates tend to decline significantly more than would be expected as a result of weight loss alone. For example, in the first controlled trial of the effect of calorie restriction on weight (the Minnesota Experiment), while weights declined by 20-26 per cent, energy expenditure fell by almost 40 per cent. This dwindling of the metabolism can cause people to plateau at a weight significantly higher than the one they were aiming for, and may also contribute to weight going back on scarily quickly once ‘diet’ is relaxed.

Without access to sophisticated testing equipment, it’s not possible to accurately gauge the impact of any diet on the metabolism. However, for those looking to lose weight in the long term, I generally advise people to avoid undue hunger. If we’re able to eat and live in a way that does not allow us to be unduly hungry then this suggests (though doesn’t prove) that the body is not being metabolically starved either.

Some people wonder how it is possible to lose weight without hunger. Well, my experience tells me this is entirely possible with most people as long as they choose the right foods. In general terms,  protein-rich are, calorie for calorie, more sating than carbohydrate rich ones. Carbohydrate-rich foods also have the added disadvantage of often destabilising blood sugar levels in a way which can drive hunger and food cravings.

There is also a theory that lower carbohydrate diets allow more ready release of fat from fat cells which can then be metabolised. The idea here is that those on a low-carb diet may be able to supplement what they’re not eating with their own fat, and may be less hungry as a result. This fatty fuel, of course, may also help to maintain the metabolism (just like putting a bit more coal on a fire would).

Recently, I came across a study which appears to support the idea that lower-carbohydrate diets are better for maintaining the metabolism than, say, low-fat ones, particularly in the context of weight loss [1].

In this study, overweight or obese aged 18-40 were assessed for a range of body measurements including ‘resting energy expenditure’ (the amount of energy burned at rest over 24 hours) and ‘total energy expenditure’ (the total amount of energy burned over 24 hours). The participants were then put on a weight-reducing diet until they had lost 10-15 per cent of their weight over a 12-week period.

Then, the study participants were monitored on the same diet but adjusted to ensure weight-stability rather than further weight loss.

After this, each participant ate three different diets in random order for four weeks each. The nature of each of the three diets was:

Here’s a table which shows the dietary make-up of all four diets used in this study: 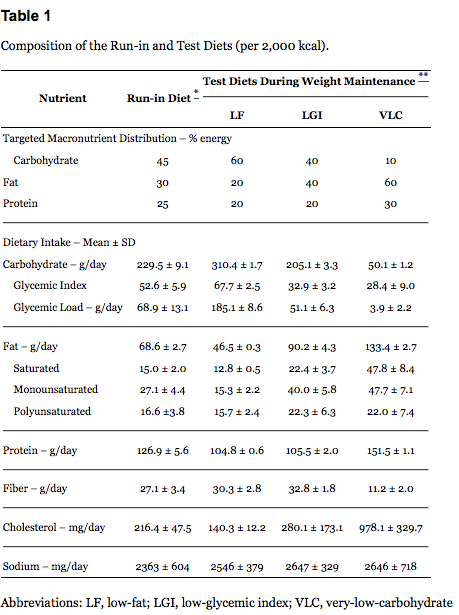 One of the major things this study tested was the effect of different diets on the metabolic rates of individuals assessed before any weight loss. In this context, diets that led to the smallest reductions in metabolic rate would be generally view as superior.

You can see from this that the decline in REE and TEE was smallest with the very low carb diet and was biggest for the low-fat diet. The results were statistically significant.

If we focus on the total energy expenditure for a moment we can see that the low-carb diet preserved more than 300 kcals a day in expenditure compared to the low-fat one, which the authors describe as “…an effect corresponding to the amount of energy typically expended in 1 hour of moderate-intensity physical activity.”

However, not all the news was good about the very low carbohydrate diet, as it induced the highest levels of cortisol (a key stress hormone) and the inflammatory marker CRP (C-reactive protein). Against this, though, it perhaps considering that carbohydrate controlled diets have been shown to bring positive changes in a range of markers for chronic disease including improved blood sugar control, lower blood pressure, higher levels of ‘good’ (HDL) cholesterol and lower levels of blood fats known as triglycerides.

One potential explanation mooted by the authors concerns the hormone leptin. Leptin is secreted by fat cells and acts in the brain to quell appetite but also stimulate the metabolism. Leptin insensitivity (a failure of leptin to act efficiently) has been suggested to be a potential underlying mechanism in overweight and obesity (something that I explore in Escape the Diet Trap).

This was a relatively small study and the test diets were relatively brief (4 weeks) in duration so we should perhaps not draw too many conclusions from it. However, there is some evidence here that diet lower in carbohydrate and richer in protein and fat may offer benefits over the long term for weight loss maintenance on account of their ability to help maintain the metabolism.

Another thing worth bearing in mind is that in this study, individuals were asked to eat calorie-counted quantities of food each day. In the real World, though, what makes a new way of eating easier and more sustainable is if it allows individuals to lose weight and maintain their weight loss without hunger and the need to consciously control how much they eat. As a general rule, as I alluded to above, here again diets relatively rich in fat and protein tend to win out over those based on carbohydrate.