Why won’t Roche release its data on flu drug Tamiflu?

Oseltamivir (Tamiflu) is a drug made by the pharmaceutical company Roche and it’s licensed for the treatment of influenza. Not so long ago, the UK Government dished out about a million packets of Tamiflu over the phone, though, it subsequently turned out that only about 20 per cent of those dispensed the drug had the infection causing concern at the time (the H1N1 virus or ‘swine flu’). You can read more about this here.

In the blog post I focus on a 2009 review by the international collective of researchers known as the ‘Cochrane Collaboration’ which concluded that the evidence did not support the claim that Tamiflu reduced the risk of flu complications such as pneumonia. Perhaps even more worrying, Roche appeared to be none-to-keen to release the data on which the claims for the benefits of Tamiflu had been made.

This issue has not gone away either. The British Medical Journal has set up a concerted campaign complete with bespoke website which aims, essentially, to force Roche to cough up its data.

And it’s not just Roche that is being made to feel a little heat here, as the World Health Organisation is also implicated in the affair. It was the WHO that declared the flu ‘pandemic’ in 2009 that sparked the stockpiling of Tamiflu in the UK and elsewhere. Yet, later that year an investigation into conflicts of interest within the WHO revealed links between those who created the planning guidelines for the flu ‘pandemic’ and Roche.

The BMJ/Tamiflu website includes this very handy timeline that summarises this affair nicely. 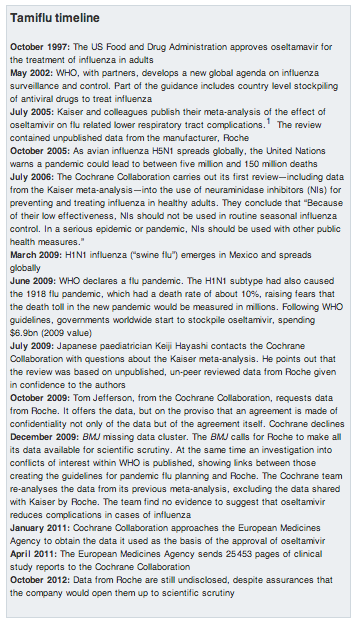 One can only speculate about why Roche is reticent about sharing the relevant data. I don’t think I’m the only who suspects the company has something to hide. It’s likely, I reckon, that Tamiflu is not as effective as the company led us to believe, and probably is more hazardous than Roche would likely to know too.

If this is how things turn out, then Roche could rightly be accused of not just profiteering, but downright fraud. Fraud that not only cost us financially, but perhaps in terms of our health too.

No doubt, Roche would get a hefty fine for any wrongdoings, just as GlaxoSmithKline did recently for a series of crimes you can read about here.

In the case of GSK, no-one went to jail despite proof of illegal practices. I think it’s good that the BMJ and other bodies are looking to increase scrutiny and enforce more ‘corporate responsibility’. I, though, would welcome more personal responsibility being enforced in this area too, with the perpetrators of these crimes (that’s what they are) being named, shamed and jailed.

‘Independent review’ confirms that mammography is inefficient and harms more women than it helps
Do statins really reduce the risk of cancer?

8 Responses to Why won’t Roche release its data on flu drug Tamiflu?