A commenter on this website yesterday made me aware of a Q and A session hosted by website netmums featuring nutritionist Fiona Hunter and sponsored by the bread manufacturer Warburton. If you’re a reasonably regular follower of this blog then you may know that I have featured Warburtons twice in recent times. First of all, this company paid the British Nutrition Foundation for an (I think) utterly biased account of the value of bread in the diet (see here and here for more on this). Then I find Warbutons also conducted a survey which makes out we’re generally wildly ignorant of appropriate sources of fibre in the diet. Not that it matters that much, because as I point out here, the sort of fibre mainly found in wholemeal and other breads (insoluble fibre) has dubious health benefits anyway.

Anyway, alerted by the commenter to the Warburton-sponsored Q and A I went to have a look (you can find it here). I came across this question and answer which I feel represents how corporate interests can get in the way of good dietary advice. 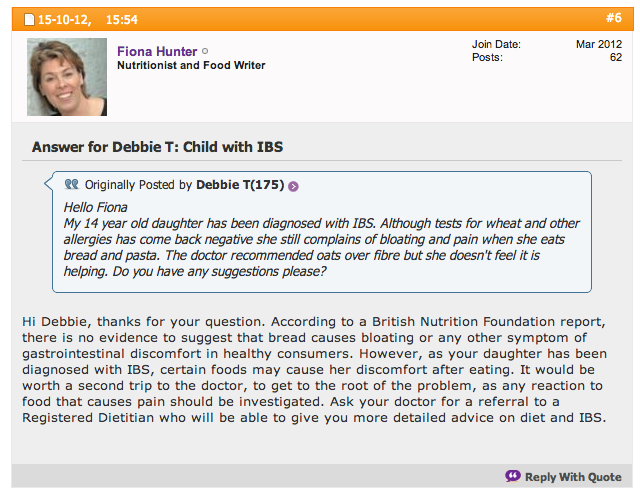 You can see a mother has written that her14-year-old daughter has irritable bowel syndrome and that symptoms appear to be triggered by bread and pasta. The most obvious explanation here is that the girl, at the very least, is intolerant to wheat. It’s possible even that she has coeliac disease (sensitivity to gluten). Fiona Hunter, however, writes that:

According to a British Nutrition Foundation report, there is no evidence to suggest that bread causes bloating or any other symptom of gastrointestinal discomfort in healthy consumers.

The underlying message here appears to be that bread is not the problem. The real problem here, as I see it, is that the mother has already told Fiona Hunter that bread is a problem (along with pasta), and she appears to have ignored this crucial piece of information and in fact attempted to steer away from it.

Fiona Hunter offers a report from the British Nutrition Foundation to allay our fears about the potential for bread to cause gastrointestinal symptoms. However, I personally would not rely on the British Nutrition Foundation for objective and balanced advice on bread. After all, it was this organisation that took money from Warburtons and produce what I believe to be an utterly biased piece of ‘research’ on the importance of bread, while failing to highlight the very real potential health issues associated with eating this food (such as its potential in coeliac disease and its very blood sugar-disruptive nature).

At the end of the day, my impression is that Fiona Hunter has not been totally upfront and honest about the fact that bread is probably a wholly inappropriate food for this girl. No mention is made of wheat or gluten sensitivity or coeliac disease. Could Fiona Hunter’s advice be in any way biased by the fact that her (I assume) sponsor makes bread? You decide.