By Dr John Briffa on 27 June 2012 in Food and Medical Politics, Weight Loss

I’m a bit cynical about the food industry’s attempts to help us lower our weight and trim our waistlines through tactics such as giving us smaller portion sizes or taking some fat out of a highly processed foods to replace it with sugar or something else of dubious value. I recently wrote about this here after being asked by BBC Radio 4 to contribute to the debate.

Many years ago I wrote an article about nutritional myths for a men’s magazine. I spent an afternoon in a supermarket ‘researching’. I found lots of what I believe to be misleading marketing techniques used to sell ‘slimming’ foods.

Another example that lives long in my memory concerns packet soup which could be found, from the same manufacturer, in ‘slimmer’ and regular varieties. The ‘slimming’ version contained about 40 fewer calories, but when I looked at the ingredients and percentages of fat, carbohydrate and protein, the packets were virtually identical. The manufacturer had managed to reduce the calorific value of the ‘slimming’ version by 40 per cent by putting 40 per cent less ingredient in the packet. But here’s the thing: it was the exact same price as the regular version.

I recalled these things while sitting on a train this morning. In front of me was a little ceramic dish which contained, among other things, packers of Demerara (brown) sugar and a ‘low calorie’ alternative. Here’s a photo of the two packets. 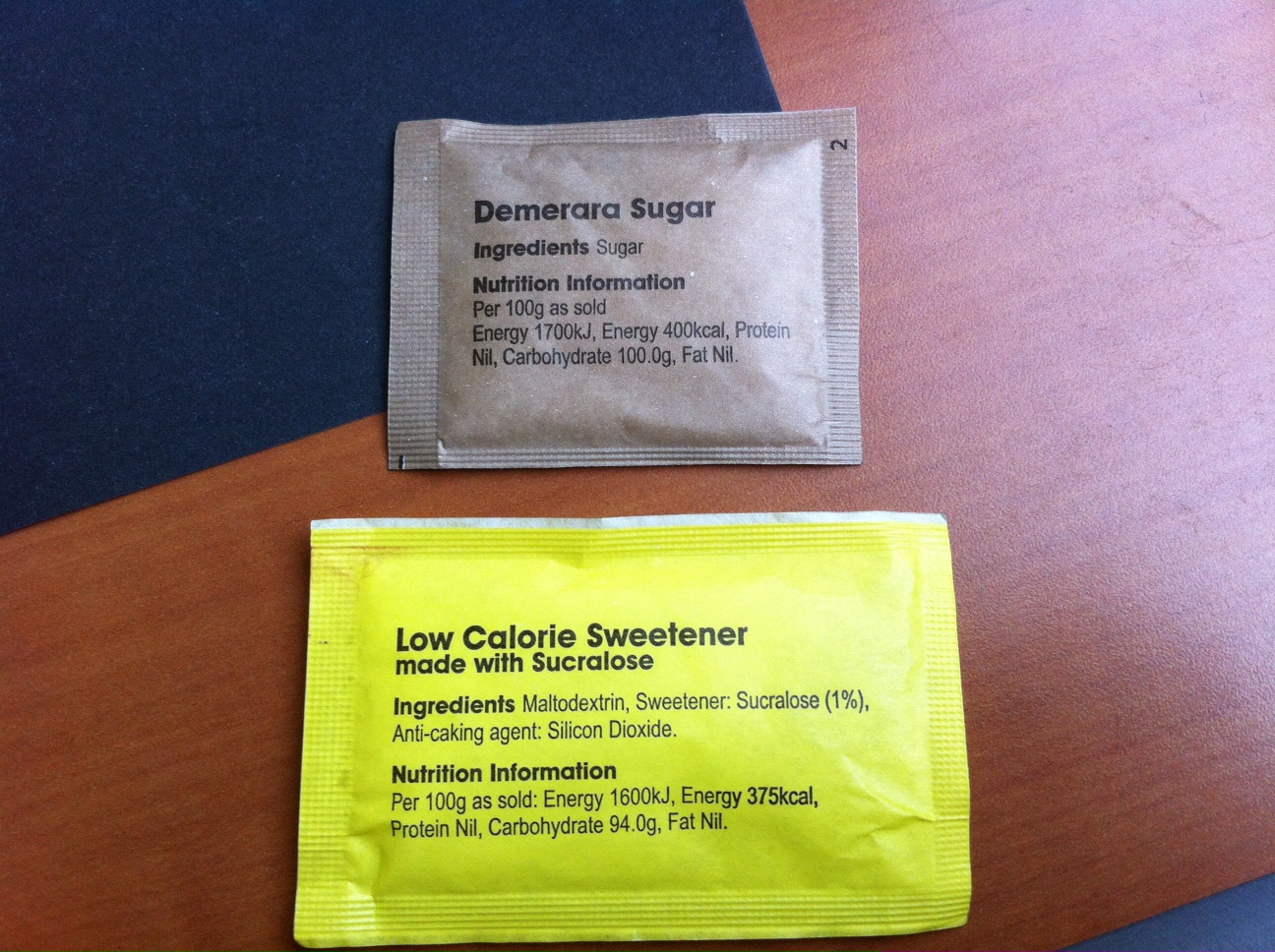 The top one contains just sugar. Sugar is carbohydrate, which contains about 4 calories (kilocalories, actually) per gram. So, as you can see, the energy in the product per 100 g is quoted, quite rightly, as 400 calories (100 X 4).

Now look at the ‘low calorie’ option. It contains sucralose (the artificial sweetener in Splenda) and maltodextrin (a carbohydrate that is somewhere between a starch and a sugar). Now take a look at the calories it contains per 100 g: 375. I don’t have weighing scales with me here, but although the sweetener is in a bigger packet, the contents feel the same weight as the sugar.

Now, I’m not at all calorie-focused, but I know plenty of people who are. When someone keen to keep their diet ‘calorie controlled’ opts for the ‘low calorie’ sweetener over sugar on a train or in a café, what do you imagine is going through their mind or is their unconscious assumption?

I don’t know for certain, but I’d hazard a guess that most will assume the low calorie sweetener contains hardly any calories at all. Or certainly a lot less than the sugar. What they’re probably not thinking is that the ‘low calorie’ sweetener is essentially comprised of sugar and that, weight for weight contains just 6 per cent fewer calories than sugar. Call me cynical…