Thankfully, not all doctors buy into drug company marketing hype

By Dr John Briffa on 30 May 2012 in Cholesterol and Statins, Food and Medical Politics

We doctors often like to think of ourselves as knowing and rational but we’re fallible and sometimes gullible just like everyone. Just look and see how easily we lap up drug-industry sponsored research and PR relating to all ‘wonder-drugs’ and other advances. Often, drugs are licensed and marketed on the basis of their impact on what are known as ‘surrogate markers’ such as blood pressure, blood sugar levels or cholesterol levels. The problem is, reductions in surrogate markers do not always translate into benefits for health. Last week I wrote a blog post which included an ever-lengthening list of drugs that have supposedly beneficial effects on blood fat levels that don’t appear to help health and in fact may even harm it.

However, even when a drug appears to benefit health, its benefits will almost certainly be touted on the basis of its ability to lower ‘relative risk’ of something. For example, we very often hear that statins (the most popular cholesterol-reducing drugs) reduce risk of heart disease by about a third. This effect, expressed like this, generally sounds as impressive to ‘patients’ as it does to the vast majority of doctors.

However, not all doctors are taken in by this sort of guff. Some realise that reductions in relative risk don’t matter much when overall risk is low. Let’s say your risk of having a heart attack over 5 years is 3 per cent. Let’s say a statin reduces that risk to 2 per cent. Relative risk has fallen by a third, right? But the real reduction in risk (known as the ‘absolute risk reduction’) is just 1 per cent (3 per cent minus 2 per cent).

I’ve made up the figures quoted above for ease of example, but in reality they are not far from the truth. In individuals with no known cardiovascular disease (e.g. no history of previous heart attack or stroke), NNTs to prevent a heart attack over several years are often in the order of 50-100. Some fine young doctors in the US have developed a website specifically based on NNTs and have assessed the effectiveness of statins for essentially healthy individuals here. 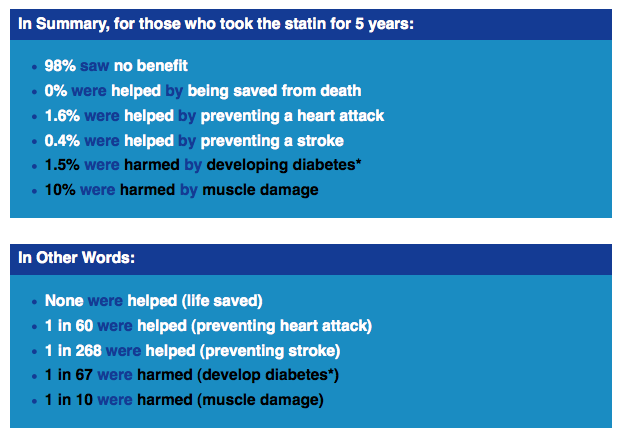 The doctors have done the same for common side-effects of statins too. Here’s a screenshot of the summary of their findings.

And here’s a screenshot of a summary of the summary, where the authors assess whether or not the benefits of a treatment outweigh the risk. Their conclusion is that they don’t.

7 Responses to Thankfully, not all doctors buy into drug company marketing hype