Wheat: opiate of the masses?

By Dr John Briffa on 17 May 2012 in Brain and Behaviour, Healthy Eating, Weight Loss

Last week I was aboard a cruise liner in the Caribbean. I had a lot of fun but was primarily there to participate in a kinda conference organised by low-carb advocate Jimmy Moore. I was privileged to share the stage with some very lovely and inspiration speakers, among them the US cardiologist Dr William (Bill) Davis. I was looking forward to meeting Bill because I’d had a skype conversation with him some months ago, and was impressed by his warmth, humour and humanity. In person, Bill did not disappoint, and he also gave what I thought was a fascinating presentation about the perils of one of the modern-day diet’s most ubiquitous components – wheat.

Bill is the author of the highly acclaimed and readable book Wheat Belly, which systemically makes a strong case for the elimination of this grain from our diets. His lecture on the low-carb cruise’ focused on this aspect of his work, and focused on what I took to be three key areas:

1. wheat’s content of the readily-digested starch amylopectin A, which is highly disruptive to blood sugar levels.

2. The lectin (toxin) in wheat known as ‘wheat germ agglutinin’ which can cause inflammation in the gut and elsewhere.

3. Gliadin – a component of gluten in wheat which has, among other things, drug-like effects.

It’s this last issue I’m going to focus on in this blog post.

In his lecture, Bill drew our attention to the fact that gliadin may not be fully digested in the gut, and give rise to small protein molecules known as ‘polypeptides’. These can sometimes penetrate the gut to gain access to the bloodstream, after which they also have capacity to make their way across the ‘blood-brain-barrier’. Once there, gliadin polypeptides can bind to opiate receptors in the brain. Opiates include chemicals like morphine, heroin and opium.

The body can generate chemicals which bind to opiate receptors which are termed ‘endorphins’. However, when a substance comes from outside the body, it is termed an ‘exorphin’. Gluten-derived exorphins can induce a feeling of mild euphoria. This might explain why tucking into bread, or a bowl of pasta, or some biscuits can seemingly be so intensely pleasurable for some. It might also explain why some struggle with leaving wheat alone.

One of the main reasons Bill highlighted the opiate effects of gluten is because it appears, to all intents and purposes, to be an appetite stimulate. Of course you’d expect anything that is somewhat addictive to drive us to consume more of it. And as Bill pointed out, there does seem to be some scientific evidence for this. 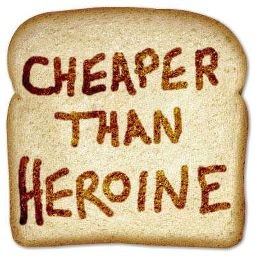 So, what happens when normal wheat-consuming people are treated with naloxone? In one study, individuals were given access to a free food and their intakes measured over two meals approximately 5 hours apart [1]. On another occasion the experiment was repeated after naloxone had been administered to the study subjects. On this occasion, they consumed about 400 calories less.

In another study, ‘binge-eaters’ were given access to a free buffet with and without nalaoxone [2]. With naloxone on board, individuals ate 28 per cent less in the way of wheat-based foods such as crackers, pretzels and bread sticks.

My experience in practice tells me that the ability of wheat (and other gluten-containing foods such as barley and rye) to have addictive qualities varies quite a lot between individuals. It does seem to be a real phenomenon, though, and there’s no doubt in my mind that eliminating or dramatically reducing wheat consumption usually leads to a significant improvement in wellbeing, energy levels, mental function (and usually weight loss) in the majority of people.

Starchy foods, especially ‘healthy wholegrains’ are often vigorously promoted to those looking to eat a nutritious diet. Wheat has a reputation as the staff of life. In reality, though, it’s often the stuff of nightmares.

Mouse study provides support for the concept of intermittent fasting
Statins for healthy people? Hang on a minute…

42 Responses to Wheat: opiate of the masses?