How hunger can weaken willpower

I do a lot of work with groups in within businesses and organisations designed to help people lead healthier, more balanced and sustainable lives, and improve their energy, vitality and effectiveness as they do this. Early on during a programme, I’ll usually ask people what they’d like to get out of it, and non-uncommonly delegates express the wish to have the ability to exert for ‘discipline’ and ‘self-control’. I appreciate the sentiment, but to be honest when I hear terms such as these my heart sinks a bit. For me, life is difficult enough without having to expend effort and mental energy, say, actively resisting unhealthy foods and forcing oneself to make supposedly healthier choices.

I’m of the mind that healthy choices need to be enjoyable and easy. I’ve noticed over the years that one thing that can have a corrosive effect here is just plain hunger. When individuals seek to improve their diet, particularly if the goal is to lose weight, then hunger often comes into it. Some people believe (consciously or unconsciously) that hunger means they must be in caloric deficit and therefore they must be losing weight. But even if weight loss is not the goal, many individuals will find themselves hungry because they have shifted towards a diet rich in fruits and vegetables, which have some nutritional merit, but generally fail to satisfy the appetite properly.

Just this week I saw a classic example of this. An overweight man told me how 3-4 months ago he’d decided, with the assistance of his girlfriend, to improve his diet. Out went a lot of rubbishy processed, grain-based foods. In came lots of fruit and vegetables in its place. Breakfast was now a grapefruit. Mid-morning snack was more fruit. Lunch was often a vegetable soup, followed by more fruit in the afternoon. His evening meal was decent (meat or fish with vegetables).

Anyway, what was the result of all this ‘healthy eating’. Two main things: almost perpetual hunger and zero weight loss. I admired this man’s ability to persist with this regime in the absence of any tangible benefit, but also how long it would be before he gets fed up with the hunger and stagnant weight and just defaults back to his original crappy (by his own admission) diet. 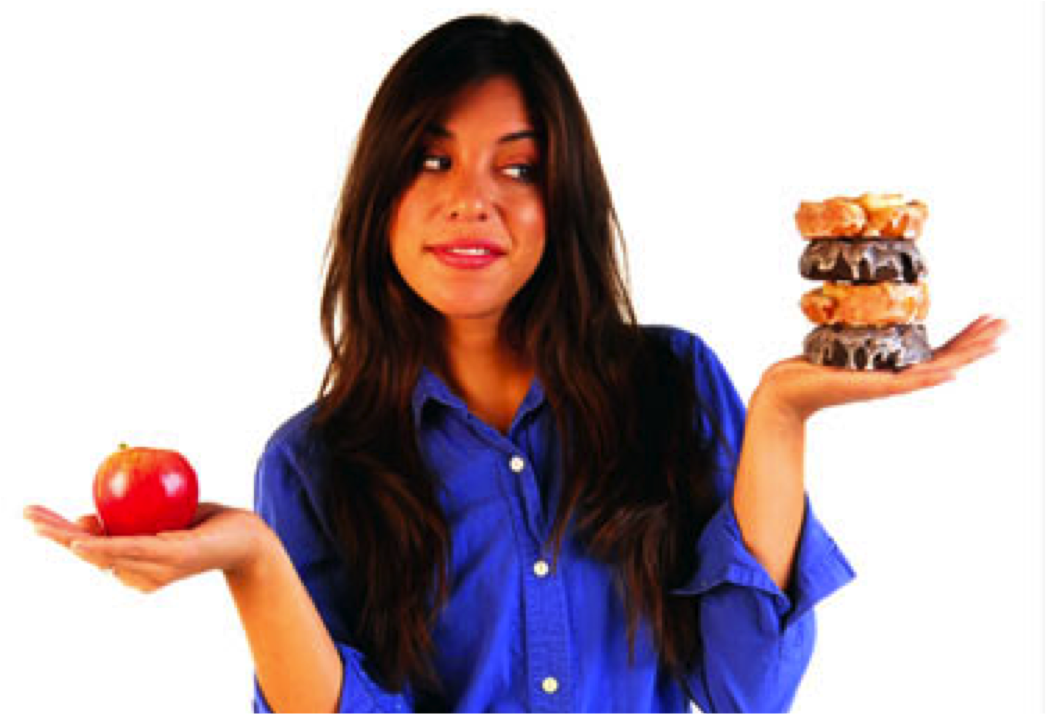 Of course, he won’t be the first person to lapse from some healthy eating regime. Many individuals have the experience of ‘toughing it out’ on a ‘diet’ for a limited period of time before ‘caving’ and feeling unable to resist foods such as bread, pasta, pizza, confectionary and patisserie. And while hunger appears to sap at the resolve, I’ve noticed consistently how keeping hunger at bay makes not having these foods so, so much easier.

When an individual does not let their appetite get out of hand, they usually find it relatively easy to eschew sandwiches at lunch and opt for a better option such as a salad or soup. I read a interesting piece in the New Scientist magazine yesterday that got me thinking about this phenomenon in a whole new way.

The piece was written by psychologist Dr Roy Baumeister, co-author of the book Willpower. In the piece he makes the point that willpower is a bit like a muscle. Once it’s ‘exercised’, it is weaker for some time after. In other words, once someone has to be exert some willpower and self-discipline, their ability to do that again is diminished until the willpower has been rested for awhile. Could this help explain why dietary restraint over time almost always comes back to bite people in the bum?

But perhaps even more interesting is this scientific observation: if individuals are given sugar between two tests of self-control, they do better on the second one if they are given a sugary drink compared to an artificially sweetened one. Could it be that somehow sugar feeds the willpower ‘muscle’ and strengthen the resolve? It wouldn’t surprise me at all, given just how often people find keeping blood sugar levels stable and rampant hunger at bay makes healthy eating a relative breeze. I’ve also witnessed just how not being very hungry can lead to people automatically drinking less alcohol too.

There’s a killer paragraph in the New Scientist piece that I’m reproducing here in full:

This glucose research also suggests why dieting is so fiendishly difficult. In order to resist tempting foods, we need willpower but to have willpower, we must eat. The essence of dieting (restricting food intake) robs us of the psychological strength needed to succeed. Perhaps dieters should concentrate on filling up with healthy food so they have the willpower to resist fattening stuff.

Yes, yes and yes, Dr Baumeister! Psychology may be his thing, but I feel he may have missed another potential vocation as a weight loss and healthy eating expert.

10 Responses to How hunger can weaken willpower