I have nothing against vegetarians, but…

I get occasional emails from vegetarians who:

2. ask how they can apply the sort of dietary principles I espouse in the context of a vegetarian diet

First off, I don’t advocate a ‘meat-based’ diet. I advocate a diet with meat (and/or fish) in it (if you don’t object to eating meat/fish on moral/ethical grounds and there’s no other barrier such a religious or you just don’t like it). Let me make this clear, I have never (and will never) suggest to someone that they should eat flesh if, for whatever reason, they don’t want to. This blog post is most certainly not a tacit cry for vegetarians and vegans to reconsider their convictions or preferences.

However, the reason that I recommend that a diet includes flesh foods is because I believe that such a diet is more likely to supply the macronutrients (like protein and fat) and micronutrients (vitamin and minerals) necessary for optimal health and wellbeing. It seems some can thrive on vegetarian diet, but I’ve known lots of others who have not.

Here’s a couple of anecdotes…

A few years back a vegetarian friend of mine was losing her hair in clumps. We looked at the usual stuff here including thyroid function and iron levels, but seemed to draw a blank. She took it upon herself to introduce fish into her diet. Shortly after her hair loss ceased. And not long after that she fell pregnant (after many years of trying). The fish may have nothing to do with these positive changes. But then again it might.

Several years ago, I was talking with a lady I met at an event. She told me she’d been a vegetarian for many years and had experienced gradually declining health. This culminated in her becoming so weak that one day she collapsed in the street. When she came round she found that she was being attended to by some kind souls. She was intuitively drawn to say ‘get me a kebab’. Someone acted on her instructions, she ate the kebab, re-introduced meat into her diet and in her own words ‘never looked back’.

Now, these are merely anecdotes and again, this is not to say someone simply can’t thrive on a vegetarian diet. My belief though is that, generally speaking, eating a vegetarian diet (and particularly a vegan one) makes it harder to enjoy peak health.

I recently came across this article in the on-line magazine Psychology Today. It provides some evidence that most vegetarians end up reverting to a diet with flesh foods in it. A poll of ex-vegetarians revealed common reasons for reversion include things like hassle and food cravings, but the most common cited reason of all was health (see below). 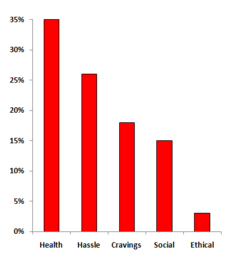 I don’t have anything against vegetarians, and actually admire the moral and ethical principles some exhibit. But I do struggle a bit sometimes when I see someone eating in a way which can be compromising their health (sometimes a lot). While it is possible to apply the sort of principles I espouse to a vegetarian diet to some degree, I’d be lying if I said I thought such a diet is likely to be as good for health as a more omnivorous one.

If you lose weight, you better make sure your leptin is functioning properly
Aspirin for disease prevention? Not so fast…

29 Responses to I have nothing against vegetarians, but…