Why might shift-workers be at increased risk of multiple sclerosis?

By Dr John Briffa on 20 October 2011 in Brain and Behaviour, Sleep, Sunlight

When I was a junior doctor, like a lot of junior doctors, I was not thrilled when my bleep would go off in the middle of the night to be called to attend to a sick person. It was not uncommon for this to happen after a full and busy day at work. Sometimes, little or no sleep may have been had the night before. And perhaps the night before that too. A weekend shift might entail starting work on Friday morning and not finishing work until Monday night. I distinctly remember senior colleagues telling me that these sort of work practices were character-building and never did them any harm. Well, that might be the case, but my belief is that sleep deprivation almost certainly harmed (and killed) patients.

Doctors hours have changed now in the UK, and along with nursing staff, tend to work shift patterns. That could mean working during the day for a few days with no night duty. But, alternatively, it could mean working at night, with the idea that sleep will be had during the day. Health professionals in hospital are, obviously, not the only people who might work this way. Security staff, policemen and women, pilots and cabin crew, and factory workers, for instance, may also spend periods living a nocturnal existence.

Getting the body clock to bend to our will is not always easy, with the result that those working night shifts, at least in the short term, can simply lack sleep. This is likely to have consequences to for energy and vitality, as well as general health. There has been some discussion in the scientific literature that shift-work is associated with an increased risk of chronic disease including breast cancer. Some have suggested that this might have something to do with disruption in the secretion of the ‘sleep hormone’ melatonin. Melatonin is an ‘antioxidant’, and in theory may help prevent cancer as well as other chronic diseases.

I was interested to read about a recent study in which shift work in adolescents was found to be associated with another chronic disease – multiple sclerosis [1]. Melatonin is mooted as perhaps having a role here in this paper, as is the tendency for disruption of sleep to lead to enhanced inflammation in the body.

I was wondering, though, whether another explanation for this association might be to do with sunlight exposure and/or vitamin D. Previous research has linked sunlight and vitamin D with reduced risk of multiple sclerosis. See here for more about this.

Other evidence in animals suggests that sunlight might exert a protective effect here in a way that has nothing to do with vitamin D. See here for more about this.

Multiple sclerosis tend to be most common in northerly latitudes (see map below). 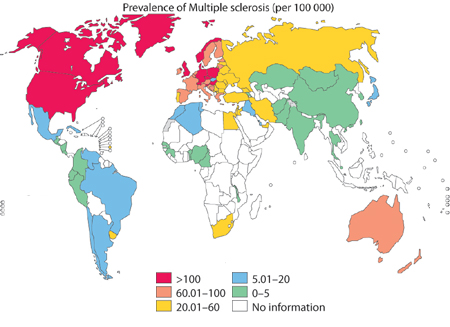 As it happens, the research linking shift work with multiple sclerosis was conducted in Sweden, which may be relevant. Sunlight is a relatively precious commodity there, and someone working at night and sleeping during the day will be at risk of lacking in sunlight exposure and vitamin D, I’d say.

This is all speculation, of course, but it occurs to me that those engaged in shift work might make a conscious effort to get safe exposure to sunlight when they can. And it might be an idea to have their vitamin D levels checked, and think about supplementing with this nutrient if low in an effort to maintain more optimal levels.

2 Responses to Why might shift-workers be at increased risk of multiple sclerosis?