If Diabetes UK wants to help diabetics, I suggest it stops recommending a diet that I think is utterly unsuitable for diabetics

Britain’s biggest diabetes charity, Diabetes UK, this week accused the NHS (the state run and funded medical care system in the UK) of “failing to learn from clear evidence that interventions to improve diabetes care can save the NHS money as well as give people with diabetes longer and healthier lives…”

In its statement, Diabetes UK informs us that “while the NHS is spending £10 billion per year on diabetes care, this money is too often being used ineffectively, with the vast majority spent on treating complications that could often have been prevented if the person had received good healthcare in the first place.”

Diabetes UK bases its claims on a report it commissioned, which I have not read, but have no reason to doubt either.

However, when I hear anyone talking the good management of diabetes, my mind very often goes to dietary approaches first. Diabetes is principally a condition of impaired ability to handle glucose in the bloodstream. While the body can liberate glucose into the bloodstream (particularly from the liver), much of the sugar in the bloodstream tends to find its way there from the food we eat. Sugar is an obvious source, but another major potential provider of glucose is starch (because starch is basically made up of chains of glucose molecules).

I can categorically state here that when individuals with diabetes cut back on carbohydrates, they almost always see significant improvement in their blood sugar control. They usually lose weight, and see improvements in markers of disease too. I’m most certainly not the only person to have noticed this. Just yesterday I met a most wonderful general practitioner who has come to the low-carb approach quite late in his career, but has used it to utterly transform the health of his patients. He showed me a variety of graphs from several patients pre- and post-adoption of a lower carbohydrate diet. He relayed a few stunning anecdotes too of people who believe eating a lower-carb diet has given them their health and their lives back.

None of what he told me surprised me, but it did not fail to warm my heart, either.

Beyond me and my GP friend, though, we have the collective experience of literally thousands of individuals with diabetes who have often seen comprehensive improvement in their condition and general health by scaling back the carbohydrate. Many type 2 diabetics them have been able to scale back their medication too, or even dispense with it entirely. Type 1 diabetics will very often report the need for much less insulin.

The generally better blood sugar control these people enjoy will, by rights, lead them to suffer less in the way of diabetic complications. In its statement this week, Diabetes UK highlighted the foot-related complications that diabetics can suffer, one potential end-result of which isamputation.

I do not doubt Diabetes UK’s desire for diabetic care to be better, and I also do not doubt the ability of lower-carb diets to help diabetics control their blood sugar better and improve their general health. So, excuse me for being a little aghast at the dietary advice given to diabetics here. Here’s a screenshot of Diabetes UK’s dietary advice for diabetics regarding starch in the diet: 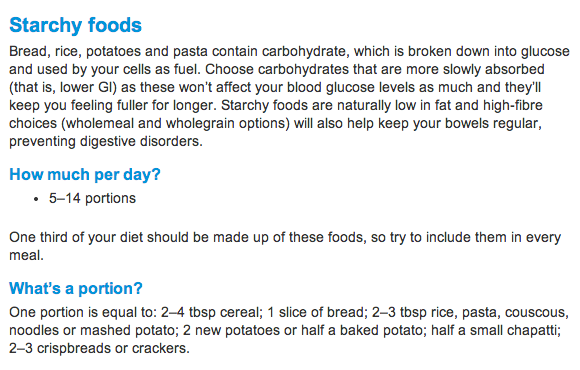 Yes, that’s right, according to Diabetics UK, a third of a diabetic’s diet should be made up of foods that are essentially concentrated glucose (many of which, by the way, are known to be highly disruptive to blood sugar). Note that the charity recommends diabetics eat up to fourteen portions of starchy foods each day.

I won’t mince my words and state here that I believe these recommendations are utterly mad. My experience tells me they will generally just entrench diabetics in their condition and the need for medical care. Compared to a lower-carbohydrate diet, the regime advocated by Diabetes UK stands to worsen blood sugar control and increase the need for medication and risk of complications. If Diabetes UK is serious about helping diabetics, I suggest it starts by ceasing to recommend a diet that, in my view, is utterly unsuitable for diabetics.

Should statin ‘key opinion leaders’ be allowed to just make stuff up?
Australian documentary challenging the value of statins is removed by broadcaster

114 Responses to If Diabetes UK wants to help diabetics, I suggest it stops recommending a diet that I think is utterly unsuitable for diabetics