I complain to NHS Choices website about its stance on carbs. 2 months later and still no response…

By Dr John Briffa on 20 February 2014 in Food and Medical Politics, Low-Carbohydrate

Back in December, I wrote a blog post about this article on the NHS Choices website. In short, I felt the ‘article’ put a very biased, unbalanced and potentially misleading case for carbohydrate in the diet.

The day after writing the blog post, I decided I would make a formal complaint about the article to NHS Choices itself. Here’s my complaint, written on 21st December 2013.

I’d like to complain about this article: http://www.nhs.uk/Livewell/loseweight/Pages/the-truth-about-carbs.aspx. The article tells us that that carbohydrates are a major source of energy. Even on a very low-carb diet, individuals are able to get energy fat and protein, and the absolute requirement for carbohydrate in the diet for energy is actually none at all (if we’re going to be accurate about it). Regarding weight control, there is no recognition in this article of the influence of hormones such as insulin and leptin on fat storage, and the differing effects of the major macronutrients here.

I believe that the idea that ‘fibre is filling’ is also misleading. In fact, there is evidence to show that when individuals adopt a low-carb diet, they very eat several hundred calories less each day quite spontaneously. The article cites one study as evidence of the fact that low-carb diets do not produce better weight loss in the long term, though attrition rates (and possibly adherence) was poor.

See here http://authoritynutrition.com/23-studies-on-low-carb-and-low-fat-diets/ for a comprehensive review of 23 studies which demonstrates superior results achieved by low-carb diets with regard to weight loss and disease markers. To my mind, dietician Sian Porter and the NHS Choices website have done a bad job of communicating the facts and summarising the evidence. I wish to formally complain about the inaccuracies in this article and its (to me) clear bias and lack of balance.

On the 6th January 2014 I received a response from NHS Choices, acknowledging my complaint, and saying that my query had been passed to the ‘Subject Matter Expert’ at NHS Choices. It’s now 2 months since I made my original complaint, and I am still to receive a reply that addresses my concerns.

In the meantime, though, the chief editor of the NHS Choices website, Paul Nuki, had time to describe (on twitter) those who express doubt about the NHS Choices advice about carbohydrate as ‘quacks’. Here’s a screenshot of his tweet, a couple of responses to it (including one from me), and then Paul Nuki’s (in my opinion) tired, lame ‘balanced diet’ line. 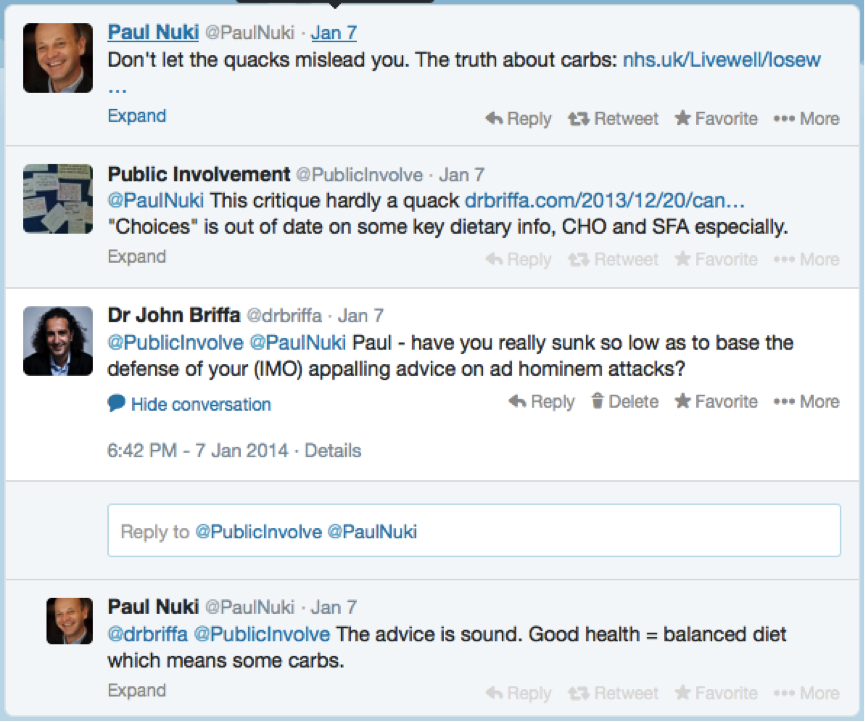 NHS Choices has a section called ‘Behind the Headlines’ which has teamed up with an organisation called ‘Sense About Science’ to create what they call ‘Healthy Evidence’. You can read about this here.

Note the claim that: ‘Healthy Evidence is part of the Ask for Evidence campaign which supports and encourages people to request for themselves the evidence behind news stories, marketing claims and policies. It helps people understand the importance of evidence and increases the quality and accountability of evidence in public life.’

This, remember, from part of the organisation (NHS Choices) that has yet to respond to the complaint I submitted two months ago about what I believe to be their very misleading and unscientific stance on carbohydrate. Oh, the irony!

I posted a link to this blog post on twitter yesterday, tagging Paul Nuki. Paul referred me to a colleague, Robert Finch, who assured me a response had been sent on 7th January, and asking me to check my spam folder. I checked: nothing there. Then today, I had a tweet from Robert Finch telling me the response had not be sent after all – ‘Human error’ (apparently). This morning, I got this:

I would like to apologies for not sending the response through to you regarding your inquiry and complaint about our LiveWell article on Carbs from Dec 21st.

The content team have informed me that you have contacted a number of times as you have not received the response they sent to me to pass on. If you have not received it I can only put this down to error in sending a high volume of responses out on that particular day.
As a result, this response has been lost in the system and not been sent out

I want to apologies for any inconvenience this has cause.

The “review of 23 studies on low carb diets” does not appear to have gone through the standard methodology for producing a scientifically valid systematic review and therefore does not meet our criteria for inclusion.

Questions you should be asking about the review: who carried out the research, what was their selection criteria, how rigorous was their search for evidence, what methodology did they use, was the study published in a peer-reviewed scientific journal?

For more information on our editorial policy, go to http://www.nhs.uk/aboutNHSChoices/aboutnhschoices/Aboutus/Pages/Editorialpolicy.aspx

Well, others will have to make their own mind up whether they feel the people at NHS Choices have engaged with the points I raised. I know what I think: that their original article and now their response to my complaint have failed us all, comprehensively and utterly.

48 Responses to I complain to NHS Choices website about its stance on carbs. 2 months later and still no response…