No evidence for the ‘blood type diet’, but does it work?

I had an email from someone asking me about the blood type diet. The ‘Eat Right for your Type’ diet was hugely popular in the US and also here in the UK from the mid 90s. The diet is based on the ‘ABO’ system of typing blood. This system gives us four blood groups depending on what are known as ‘antigens’ on the surface of the red blood cells: type A (which have ‘A’ antigens on their cells), type B (who have type ‘B’ antigens on their cells), type AB (who have both) and type O (who have neither). According to the author of the book, Dr Peter D’Adamo, the foods that are best for us are determined by the antigens on our cells.

The email reminded me that I had recently seen an piece of research in the American Journal of Clinical Nutrition where the authors had sought evidence for the blood type diet [1]. I don’t want to ruin it for you but the conclusion was there is none.

Now, this does not mean that the blood type diet does not work. The fact is, it’s not actually been studied properly at all. And, as the saying going, absence of evidence is not evidence of absence. If the diet was subjected to proper study, it might turn out to work just as Peter D’Adamo says it does.

However, if I am going to be honest, for a long time I have had my doubts about this diet. I don’t deny that it may help people. I just doubt the benefits have anything to do with someone’s blood type. 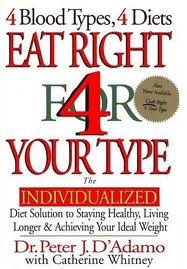 Dr D’Adamo’s reasoning is based on substances on the surface of foods known as ‘lectins’. Basically, lectins have the capacity to react with blood antigens, and this can cause red blood cells to clump together, which can lead to any number of ills including fatigue and chronic disease. According to Dr D’Adamo, the foods we react to are largely determined by the antigens to be found on our red blood cells. Those of O blood type (the original blood group) individuals are best suited to a diet devoid of grain and dairy products. Groups A, B and AB, he says, came later and are therefore better adapted, to varying degrees, to these more recent additions to our diet. Dr D’Adamo claims not only that different blood types developed at different points during our evolution, but that the predominant diet at their time of origin reflects the ideal diet for an individual of that blood type.

This may sound a decent enough theory, except I think there are a few problems with it. Firstly, it simply isn’t established when different blood groups came about, which casts considerable doubt on the validity of one the blood group diet’s major tenets. Also, if blood groups A, B and AB only came since we converted from hunter-gathering to farming, then their appearance was very recent in evolutionary terms. Evolution is a slow process, and I wonder if it’s likely that any of us are particularly well adapted to the diets assigned by Dr D’Adamo to those of blood types A, B and AB.

Another deficiency of this diet relates to the blood types themselves. The ABO group of antigens are just one way to type blood, but there are literally dozens of other antigens on the surface of the blood cells. Following Dr D’Adamo’s logic, is it not possible that these also developed at different times and therefore influence our dietary requirements? This possibility and the muddied waters it brings is not address by the approach taken in the book.

Another issue with the blood type approach is that it seems to be based on experiments in which lectins from food have been mixed with blood in the test-tube. This is important because these experiments do not reflect what happens in nature. Under normal circumstances lectins are not injected into the bloodstream, but are eaten. This gives the body an opportunity to inactivate the lectins through the process of digestion. Also, the gut wall may provide some protection by providing a physical barrier against the absorption of lectins into the system. Lectins may also be deactivated even before they get into the gut through the way in which foods are prepared and cooked.

There is no doubt in my mind, however, that food sensitivity issues do exist. It’s just that mixing lectins with blood cells in a test tube may not be the best way to test for them.

Another potential deficiency of the blood type approach is that while it focuses on lectins, there are several other ways in which the body can react to foods. For example, the body can react directly to foods with white blood cells known as T-cells, and can also produce antibodies of more than one type (the two main types in this regard are known as IgE and IgG antibodies). Such reactions, that are clearly important for assessing food suitability, are just not taken into consideration in the lectin-based ‘blood group’ approach.

None of this means that applying the principles of the blood type diet will not help individuals. The most common blood group, ‘O’, is advised to eat what amounts to a dairy and grain-free diet. Bearing in mind the very frequent role these foods play in health issues generally, then the type O approach is likely to help a lot of people. Also, Dr D’Adamo advises not just the O’s but also the A’s and B’s to eliminate major offenders in the diet such as commercially-produced bread, biscuits, pasta and cereals. These foods are generally bad for health for a myriad of reasons, and perhaps it’s no wonder that individuals feel better for getting them out of the diet.

There is no doubt in my mind that there is metabolic individuality, and some people suit certain dietary approaches more than others. For the reasons about, though, I doubt if this has anything at all to do with blood type.

Could this simple strategy stop snoring and sleep apnoea?
Is publishing ‘league tables’ of surgeons’ performance good for patients?

10 Responses to No evidence for the ‘blood type diet’, but does it work?