By Dr John Briffa on 20 March 2012 in Uncategorized

Acne is unheard of in populations eating a ‘primal’ or ‘paleolithic’ diet. This has caused some researchers, for example Loren Cordain (author of The Paleo Diet), to question what factors might be at play here. One prominent theory concerns the impact of eating carbohydrates that tend to be disruptive for blood sugar levels. These foods stimulate, among other things, the secretion of insulin and something known as insulin-like growth factor-1 (IGF-1) that induce changes in the skin that are conducive to the development of acne. Not only that, but a low glycaemic load (GL) diet (one which will tend to lower insulin and IGF-1 levels) was found to brings benefits to people with acne. You can read more about this in a previous post from 2007.

Very recently, the journal Acta Dermato-Venereologica published a study which again tested the potential of a low GL diet as a treatment for acne [1]. According to the summary of this study, eating a low-GL diet led to a significant reduction in acne, as well as evidence under the microscope of reduced sebaceous gland size and lower levels of inflammation.

This study is accompanied by a commentary [2] which talks about the role of diet in acne, and it inevitably focuses on the role of carbohydrate here, making reference to this recent study as well as the one I wrote about in 2007 that I link to above.

The author of the commentary also focuses on the potential role of milk in the development of acne. This is something that has been mooted before (see a previous post here from a couple of years back for example). 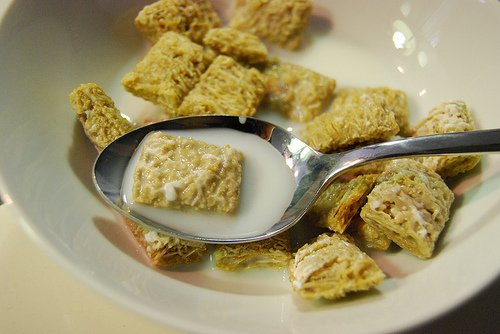 Cereal and milk - essential food or recipe for acne?

Again, insulin and IGF-1 are implicated. The author of the commentary makes the point that insulin and IGF-1 end up stimulating a process (mammalian target of rapamycin complex 1) which are similar to the hormonal changes seen in puberty. The author makes the point that a drive in this direction may also add to the burden of health issues such as obesity, type 2 diabetes and cancer later in life.

All in all, the author is down on Western diets, and urges dermatologists to counsel their acne patients about its hazards. And while he does not make this claim, it’s clear that what would be generally better for these patients (and, in my view, lots of other people) is a diet which is more ‘primal’ in nature. This can be a tough thing for some to accept, given just how much we’re told that children ‘need’ grains (energy) and milk for healthy bones – neither of which are true, by the way.

Tom Naughton owns the nutritional establishment and give us hope for the future in just 20 minutes
If your vitamin D levels are low, what’s a useful starting dose?

10 Responses to Got acne? Go primal